What is the meaning of "Qutb al-Mutasarrif?" 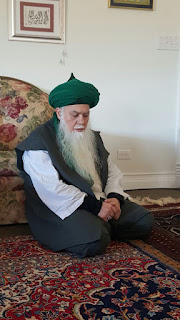 What is the meaning of "Qutb al-Mutasarrif?" A simple clarification is that I am not making that claim. He gave that and it is an honor; I never asked for it. He said, "You are Qutb al-Mutasarrif," and when he says something he gives its power with it. You will not only take something by hearing; that is not a real gift or grant. If I say, "I am giving you this frame," but I don't give it, then what is the benefit? No, when I say, "I'm giving you this frame," it means you must take it and go, carry it. So when he said, "I'm giving you! You are Qutb al-Mutasarrif," it's finished and that is real. There are five qutbs: Qutb, Qutb al-Bilaad, Qutb al-Aqtaab, Qutb al-Irshaad, Qutb al-Mutasarrif, and each has his own duties to perform and is responsible in front of Sultan al-Awliya (q) and Prophet (s).

To describe "Qutb al-Mutasarrif," if there is a university with 20,000 students, who is overlooking the students' affairs? There are many administrative offices, but on top of that there is one who decides what is going to happen. The decision is for the rector or the president of the university. Even if the university has five thousand or one million students, everything has to report to the rector or president of the university, who has to know every simple issue. That is an example. Qutb al-Mutasarrif is not like that. He is someone who works with the power and authority of the one who gave it, not his own power and authority. When he claims his own power and authority, it is nothing. But he works with the power of the one who authorized him. This means, he can take from that power, naseebuhu, of the Sultanu 'l-Awliya. Qutb al-Mutasarrif takes his share of power in order to fulfill his responsibilities.

Nothing moves in this world without Qutb al-Mutasarrif knowing about it! If there is anything moving in this universe, the Qutb al-Mutasarrif has to know about it. If he doesn't approve, it doesn't move; both living and non-living species. That is a grant to that qutb, and the other four have different duties and are of their own level and character. The others can speak on their own; I am not speaking on that, but I am speaking about what Mawlana Shaykh Nazim gave to me, and I am giving this like a small sample of perfume on his hand, like one drop. Qutb al-Mutasarrif, no one will receive a bite without his permission and will not take one drink of water without his permission. This is not because of his own self, but because he is using the power that is being passed to him, like a river or a pipe moving. That one doesn't need written ijazah; the ijazah is through the heart from the one who has authority and the one who gave it!﻿
Dikirim oleh Abu Ahsan pada 13:54

YOu are comparing Allah with the Creation, Allah is NOT like the director of an Univerity who needs workers to administrate the work, ALLAH DOES NOT NEED ANYONE TO ADMINISTRATE HIS CREATION. ONLY HIM DESERVES TO BE WORSHIPP WITHOUT ASSOCIATES. Your mawla is only Allah and if you seek intercession though any of Allah's creation you are making SHIRK and this is not Islam